AN OPEN INVITATION TO "HOT TOPICS"!

There will be complimentary imported beer and fine wine, compliments of Chris Pinon Media Studios.

The theme, Hot Topics, is open to interpretation. However, as fate would have it, I had an idea that had been tossing around in my gray-haired head for some time. From the early days of Chris Pinon Media Studios I have wanted to do a photo shoot with newspaper clippings as a background. I thought it would look unique and cool to use actual newspapers instead of wallpaper made to look like newspapers.

Therefore, about month before Hot Topics was announced, I made plans to create a backdrop with nothing but newspapers. My plan was to extend the newsprint from the wall and cover most of the floor. I spent about two weeks buying newspapers every morning. This included the Houston Chronicle, The New York Times and the Wall Street Journal. It was at this time that the stars and planets aligned in my favor. I asked one of the event coordinators what the upcoming theme would be for the summer exhibition. He told me, "Hot Topics". Everything fell into place.

Through Instagram I was able to procure the talents of prolific model, Liz Ashley - a great and awesome collaborator who also contributed many ideas to this shoot. These photographs will be on display at Sabine Street Studios from August 11 to October 6, 2022. Stop by and say hello!

The image below is the result. Hence my interpretation being: There are many important things happening in the world today but most people only pay attention to news about the Queen's Jubilee and the defamation trial of Johnny Depp and Amber Heard, two events taking place at the time which have absolutely no effect on their lives. 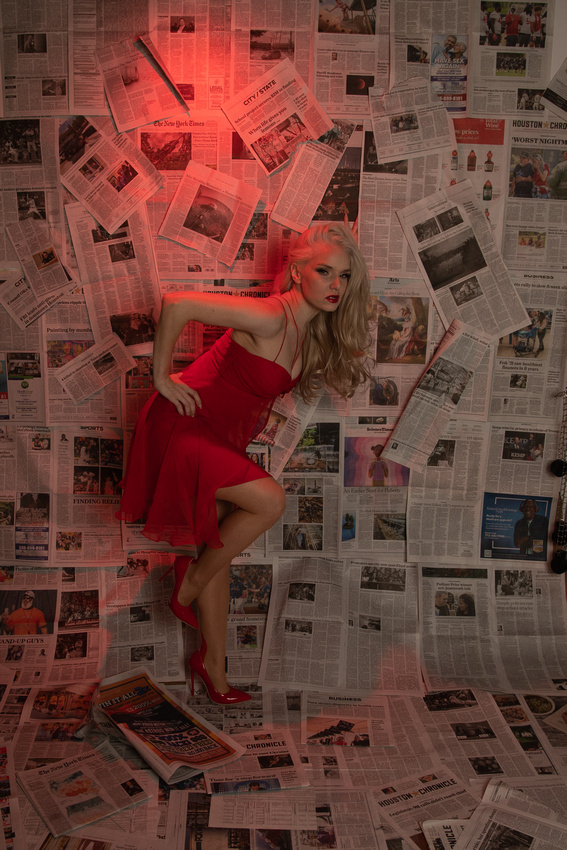